In conjunction with the fiftieth anniversary of Disneyland in 2005, the Disney direct online store offered a splendidly-detailed static display model of Disneyland's first monorail, the Mark I. The die-cast, O-scale model is 22" long and comes with a black, three pylon and track stand. Each model comes also with a cloisonne pin. 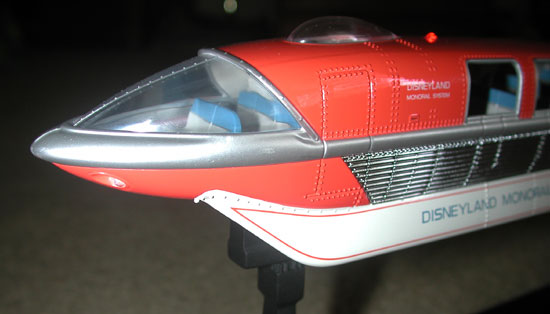 The model was designed by Will Babington and Rich Allsmiller, based on Disney Imagineer Bob Gurr's famous1959 design. The models were produced by Master Replicas, Inc. and made in China. This image shows some of the detail, including the interior's seats as well as rivets on the exterior. Two button-cell batteries power two headlights, one beacon behind the driver's bubble, and two red tail lights. The three-car train features a slight flaw, in that it has a bit of an "arched back" and is not perfectly straight. The nose and tail car are angled up slightly, probably only noticeable to the discerning collector.

To the right you can see the blue cross logo that is similar to the original Sante Fe logo that adorned the original Mark I. The name of the train has been modified to not include the words "Disneyland-Alweg Monorail System," which appeared on Mark Is and Mark IIs. While the current Disney Company might have been concerned with copyright issues, the Alweg Company has not existed since the 1960s and that shouldn't have been a factor. It's a shame that the amazing straddle-beam monorail technology that Alweg developed is not given the credit deserved on this fine model, not even in the Certificate of Authenticity that comes with it.

Under the train are representations of the Alweg-design wheel/bogie configuration. Headlights are on and visible here on the right. 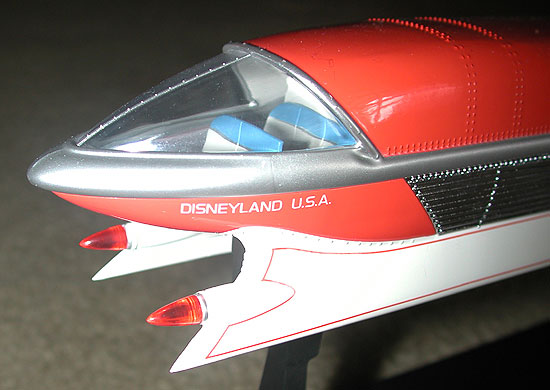 The rear car features the 1959 Cadillac fin tail lights, which were removed from original trains shortly after their introduction in 1959. The red train Mark I is a limited edition, with only 1959 of them manufactured and sold. Even more exclusive is the blue Mark I scale model, representative of the second train to operate in Disneyland. The blue Mark I scale model was limited to only 200 copies. All 200 sold out almost immediately after introduction in May of 2005, and started to show up on Ebay for hundreds more than the original online price of $299.00.

/ back to Collectible Corner main page