In 1963, Los Angeles politicians were given an offer too good to refuse. The Alweg Monorail Company, which had gained world-wide recognition for its demonstration monorail at the 1962 Seattle Century 21 Exposition, was looking to establish a major foothold in the world of urban rail transit.

"We are pleased to submit this day a proposal to finance and construct an Alweg Monorail rapid transit system 43 miles in length, serving the San Fernando Valley, the Wilshire corridor, the San Bernardino corridor and downtown Los Angeles." So wrote Sixten Holmquist, then President of the Alweg Rapid Transit Systems in his June 4, 1963 letter to the Metropolitan Transit Authority (MTA). 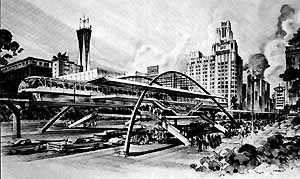 He went on to detail the financing aspect, "this is a turn-key proposal in which a group will share risk, finance the construction, and turn over to MTA a completed and operating system to be repaid from MTA revenues."

Alweg also agreed to conduct feasibility studies for expansion of the system over the entire Los Angeles Metropolitan area if the offer was accepted. Undoubtedly, if the monorail had been built, it would by now have been expanded to all major LA destination points and beyond. 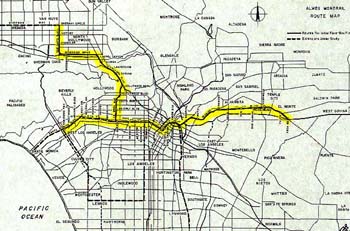 Most people in Los Angeles today are totally unaware of Alweg's offer. The subway system that today parallels only a tiny portion of what would have been the LA Monorail alignment is an extraordinarily expensive joke. An unfortunate joke that has cost USA and California taxpayers billions of dollars, not millions, and yet it still doesn't travel far enough to be of any great value to most LA basin citizens.

What happened to the Alweg proposal?

In their infinite wisdom, Los Angeles supervisors at the time rejected the wonderful offer in favor of no rail. A former Alweg engineer once told me that there was much excitement for the proposal at the time, that is until Standard Oil got involved. Practically overnight support for the project disappeared amongst LA politicians. What could have been the start of monorail construction all across the USA was stopped cold before it even got started. 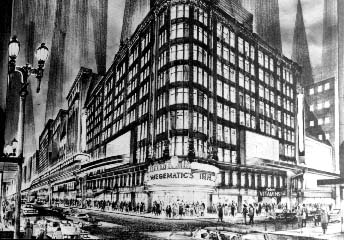 How about full-scale Alweg trains slipping in and out of LA buildings?

Ray Bradbury, world-renowned science fiction writer and futurist, recently wrote in Westways Magazine about the terrible decision in an article on the future of LA. He wrote... "on New Years Day 2001, let us pour 10,000 tons of cement into our never-should-have-been-started, never-to-be-finished subway, for final rites. Its concept was always insane, its possible fares preposterous. Even if it were finished and opened, no one could afford to use it. So kill the subway and telephone Alweg Monorail to accept their offer, made 30 years ago, to erect 12 crosstown monorails--free, gratis--if we let them run the traffic."

"I was there the afternoon our supervisors rejected that splendid offer, and I was thrown out of the meeting for making impolite noises. Remember, subways are for cold climes, snow and sleet in dead-winter London, Moscow or Toronto. Monorails are for high, free, open-air spirits, for our always-fair weather. Subways are Forest Lawn extensions. Let's bury our dead MTA and get on with life."