Greg Vassilakos, engineer and TMS member, first posted this commentary on the Friends of the Monorail Discussion Group. We thought the comments were worthy of a larger audience and with Greg's permission we have included them here. His comments were written a little over two weeks before Seattle's fifth vote on the monorail project. At the time Greg wrote this, it was widely anticipated to be the final vote, as support for the monorail had dwindled during the events leading up to the mayor-demanded election proposition to revamp or kill the project. 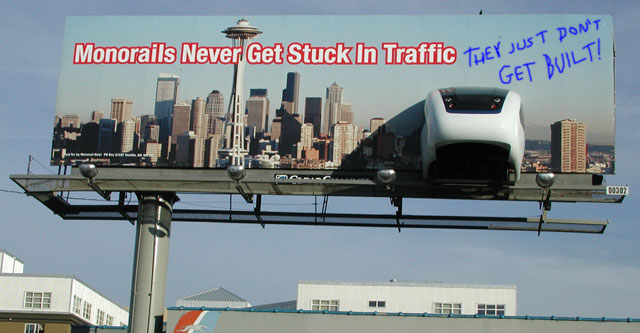 I realize that the patient isn't yet dead; however, the event is so widely anticipated that it doesn't seem premature to start the finger pointing. The following is my list of the fundamental missteps of the Seattle Monorail Project (SMP):

I'm keeping my fingers cross that a Westlake to Ballard monorail line will reemerge from the next round of transit studies. If such a line is bid in the future, I am sure the contract will not be DBOM. No sane contractor would consider bidding a large DBOM transit project in Seattle ever again.