Why is it so bloody hard? 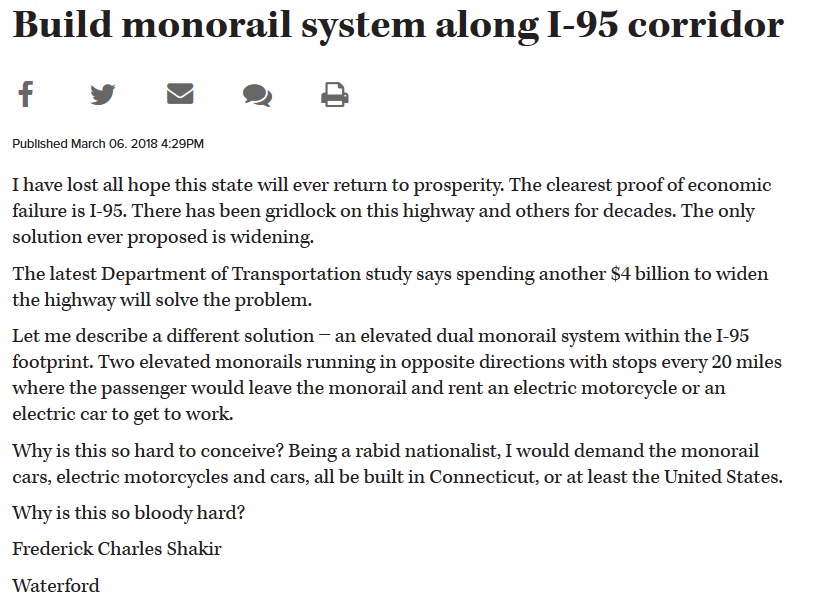 Mr. Shakir, the answer is simple.

Of course the problem is that the transportation department that knows only one technology, is going to try to use said technology to solve all our transportation problems - irregardless of wheather it's the best solution or not. Which is why, for the past 75 years, the US highway and road system has grown a thousand fold, and every other type of transit has practically vanished.

But now we're in a pickle. We've grown our roads so massive that they threaten businesses, the environment, neighborhoods and communities, and yet they still can't handle the commuter load; they're still congested and we have neither the time, space, money, desire, nor will to enlarge them. Nobody wants a road in her backyard, nor wants the road in her backyard enlarged. The solution is two part.

First, we need a change in spending priorities. Since the United States lacks the political and industrial vehicles (pun intended) required to implement public transporation system on a grand scale, we need laws mandating change in transporation funding. We need laws requiring equal monies be spent on mass transit projects as on road projects. Jobs won't be lost, jobs will be created.

Highway construction crews will raise monorail tracks. Building and installing monorail systems in each US city will create hundreds of thousands of construction jobs in each state. Automobile maufacturers and technitions can expand to produce and service the trains - thousands upon thousands of monorail trains, control equipment, stations, etc...

These changes mean job creation, and climate change mitigation. It's a win-win for everyone.

In a world where economies loose billions of dollars each year due to traffic congestion, and in a world rapidly warming due to human consumption of fossil fuels, and in a world which looses millions of acres of wilderness each year to sprawling development and road construction, we need to build green, electric, automated, elevated monorail systems in all US cities. Put Americans to work building monorails.

This is a commitment to America’s future.