The monorails listed above are MULTI-STATION systems. Recreation or view-giving minirails are not included. Some one-station ride monorails are described in our Novelty Monorails section. Cable-driven shuttle monorails are covered in our Technical Pages under the heading Cable Car Monorails. 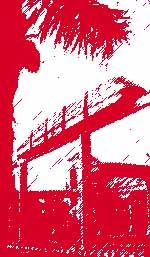 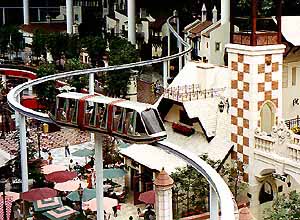 Lotte World was the first permanent installation of an Intamin People Porter class minirail. The three-car trains have a capacity of 18 passengers and travel a leisurely 2.9 meters per second. Maximum distance between supports is 12 meters.The guideway is only 230 millimeters wide. Probably the most impressive feature of Intamin's People Porter is its capability to easily climb or descend 20 percent grades. The Lotte World monorail connects a large indoor amusement area (pictured here) with an outdoor island with more amusements.

Window on the World, China 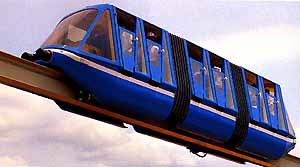 An Intamin People Porter minirail connects stations at this world-themed park. Eight small three-car trains run on the track, each with a capacity of 18 passengers. The success of this minirail has prompted the city of Shenzhen to install a larger Intamin monorail for a transit loop line downtown. First monorail in China!

An Intamin monorail operates in downtown Shenzhen. The system has five of the new P28/24 class trains operate on a loop that takes the monorail to various sights in the quickly developing city. The box beam guideway is 500mm wide and 700mm high. The maximum grade is at 10%. Three-car trains can carry 24 passengers seated. The typical span between columns is 15 meters. When it first opened, there were seven stations, as of 2016 four remain. Intamin's first urban system. 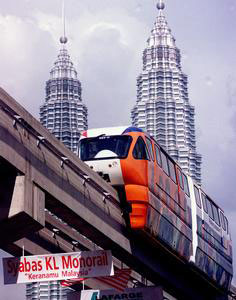 Monorail Malaysia is a relatively new monorail supplier with a history of bus manufacturing. The company took charge of the Kuala Lumpur Monorail system when the Asian financial crisis helped stop the project in December of 1997. Originally, the system was being built by Hitachi. Malaysia revived the project in July of 1998 and the Malaysians decided to complete the system on their own to save money. To the left is one of the trains with the Petrona Towers behind. The vehicle is a very close cousin of the Alweg monorail trains of Seattle. Be sure to see our thirteen-page photo essay on the KL Monorail in Special Features. In 2007, Monorail Malaysia, also known as MTrans, was acquired by Scomi Rail. Scomi is aggressively pursuing opportunities to build monorail in Malaysia and other countries. 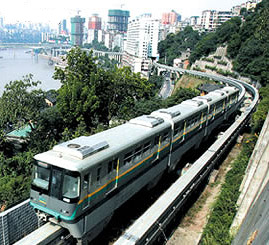 China's first ALWEG-type monorail system officially opened on June 18, 2005 in Chongqing, China. The monorail serves the main business and public districts. Line 1 begins as a subway under downtown Chongqing, then runs west elevated along the southern bank of the Jialing River, then turns south into the city's southwestern suburbs, ending in the Dadukou district. Construction began in January of 2001, and the intitial line included 2.2-km of subway tunnel with three subway stations. The Japanese Bank for International Cooperation (JBIC) provided a loan to finance the development of the monorail. The Chongqing Monorail is capable of carrying 30,000 passengers per hour at peak hours. In September of 2011 Line 3 opened, adding over 17 kilometers to the system and making it the longest monorail system in the world, surpassing the previous record holder in Osaka, Japan. Then in December of 2011, Line 3's extension to Jiangbei Airport opened. With that addition, Line 3 became the longest monorail line in the world at 39.1 kilometers. In December of 2012 Line 3 opened an extension in the Yudong district, making the line even longer at over 55 kilometers with 39 stations. Line 2 and 3 were connected in the south on December 30, 2014. Chongqing Monorail will probably be the largest monorail for a long time. The Chongqing Monorail also is the only monorail system in the world with an X-shaped crossover point. Line 3 features the highest river crossing of any monorail system in the world, with the Jialing River crossing on the Chongqing Yu'ao Jialingjiang Bridge. 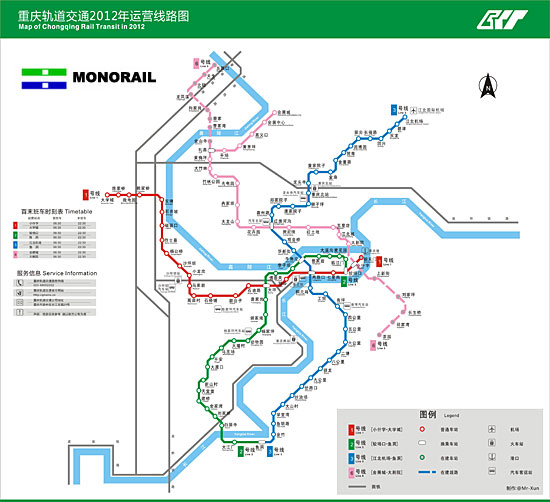 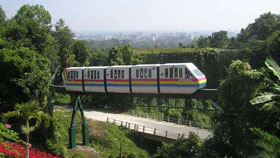 This minirail circles the perimeter of the Chiang Mai Zoo at a leisurely pace for sight-seeing and transit between four stations. The track is 47 centimeters wide and the air-conditioned trains have a capacity of 50-70 passengers. 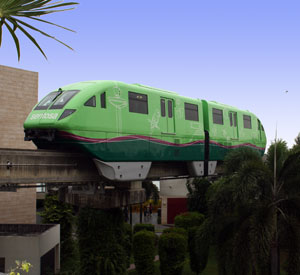 Hitachi Asia Ltd. won a S$78 million (J¥5.4 billion) contract from Sentosa Development Corporation (SDC) to build a new monorail system, "Sentosa Express." The 2.1 km long double track line links the main island of Singapore and Sentosa Island, with gateway stations at World Trade Centre's Harbour Front MRT Station and Central Beach on Sentosa. The line improves access to Sentosa Island from the southernmost tip of Singapore. The monorail route has four stations. The Sentosa Express is the first in the world to use Hitachi's new small monorail system. The system was originally developed by Hitachi in Japan as a small, standard and cost-effective solution to the transportation needs of small to medium-sized cities. The monorail replaces the small Von Roll monorail that circled the island from 1981 to March of 2005. 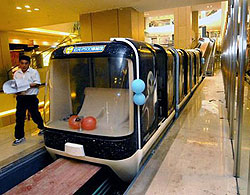 The new Red Star Macalline store in Shanghai has one of the most unique monorails in the world. The furnishing store features a mini-monorail system that spirals it's way up inside the stores six stories, stopping on each floor. The 14-meter long system is the first of its kind in the world.

A spectacular new man-made island has been built near Dubai in the shape of a palm. On the island are upscale residences, resorts and attractions. Hitachi built a monorail system to connect major points on the trunk island with the gateway. The system is driverless, but attendants are onboard in the same way as a similar monorail has at Tokyo Disney Resort. Stations include Gateway Towers and Atlantis Resort. Two unused mid-way stations will be opened for developments opening in 2016. Nakheel Mall and The Pointe will double the number of stations on the line. A 2-km extension is alaso planned to connect with the Dubai Metro. The monorail system is the first major monorail in the Middle East and the first rail system in United Arab Emirates.

A 1.6 kilometer shuttle monorail that runs along the Malacca River. It connects Taman Rempah in Pengkalan Rama to Kampung Bunga Raya Pantai in the central part of the city. One 24-passenger, three car train shuttles back and forth along the winding river. The line was developed by Kumpulan Melaka Berhad and Agibs Engeering and Construction Sdn Bhd. The line was developed as part of government efforts to enhance the Malacca River area of the city as a tourist attraction. 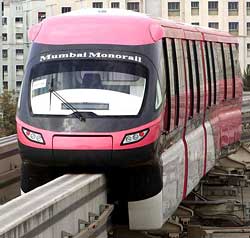 The first major monorail in India was contracted to the consortium L&T-Scomi. The Mumbai Metropolitan Region Development Authority (MMRDA) approved a contract submitted by L&T-Scomi for the Rs 2,460 crore system ($545 million). The first phase 8.9-kilometer line opened to the public on February 2, 2014. The monorail is being implemented on a build-operate-transfer (BOT) basis. Scomi will run the monorail for the first three years. The second phase is scheduled to open in 2017, increasing the line to 20 kilometers with 18 stations.

The Xi'an Monorail features three Intamin P8/48 trains on a 9.6-kilometer, single-line loop system. Each train can carry 48 passengers, hence the designation P8/48. Intamin handed over the completed system to the customer in October of 2012, but the government formal approval process took over two years to complete. The first phase opened on January 16, 2015. Xi'an, with a population of over 8 million, is one of the oldest cities in China. Since the 1990s, Xi'an has been a part of the economic revival of the region. 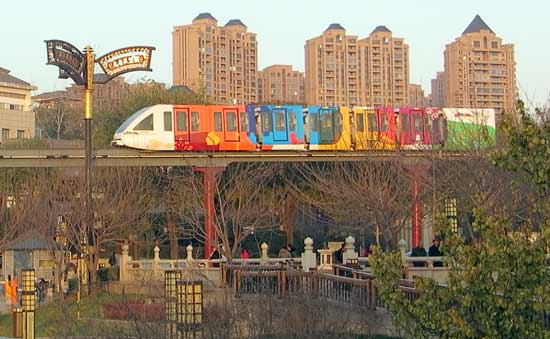 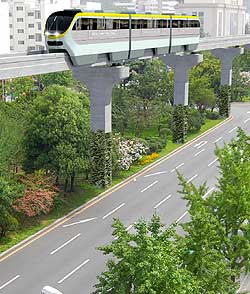 Per a contract signed in 2008, Hitachi built a US $333 million monorail system in Daegu, the fourth largest city in South Korea. The 24-kilometer system connects southeastern and northwestern sections of the city. This is Hitachi's largest order for monorail outside of Japan, and follows systems sold in China, Singapore and United Arab Emirates. Daegu's train design is arguably Hitachi's best to date, and was selected by Daegu citizens from three choices. The monorail features three spectacular bridges. The alignment has been enhanced environmentally with a generous amount of landscaping. The monorail opened to the public on April 23, 2015 after extensive testing and safety training. 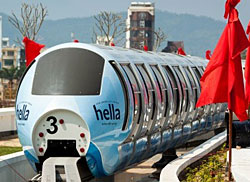 Asia Park theme park in the central city of Da Nang in Vietnam opened in 2015. The park is located at Hoa Cuong Bac Ward in Hai Chau District and features a Intamin P6 monorail/tram system. When the park is complete, Asia Park is expected to welcome about 2.5 million visitors each year. It includes a culture park, an amusement park and a multi-functional center. For transport and sightseeing purposes eight Intamin monorail trains P6/66 travel within the park. The monorail opened January 1, 2016. The trains provide a ride all over the exhibition area and transit service is provided between three stations. More than 2,000 passengers per hour can enjoy their trip along the 3-kilometer route.

Qom Monorail is under construction, making it the second major monorail to begin construction after Tehran. The first phase of the Qom Monorail will consist of six kilometers of track with five stations. It will link the northeastern part of the city with the grand mosque in the center of the city (stations 1-8 on map below). The cost is approximately $120 million ($20 million/km). After expansion, the system will total out to 25 kilometers and 17 stations. New to monorail manufacturing, the project is headed up by Mapna and Kayson companies of Iran. Trains are being provided by FCF SpA of Italy. 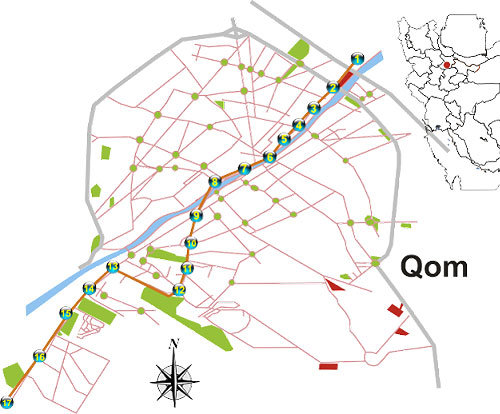 In May of 2010 it was announced that Bombardier will build a 3.6-kilometer monorail system for the King Abdullah Financial District, the new financial and business center under development in Riyadh. The system will feature six stations and six two-car, driverless monorail trains. The $241 million monorail was originally scheduled to be completed in 2012. As of late 2013 construction of track has begun. The technology chosen is Bombardier's Innovia Monorail 300.