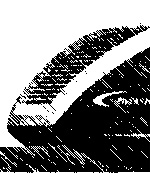 The Rivers Monorail is based on Intamin P30 technology, with trains capable of speeds up to 80 km/hr. The Rivers State government is providing 20% of the costs while TSI Holdings Limited will invest 80%. The first phase of the system will be 2.6 kilometers long. It will have t-supports for future expansion, but open as a single lane shuttle with three stations. Phase Two will double the track and extend the system another 3.9 kilometers. Rivers Monorail is actually somewhat of a hybrid tram/monorail system. The track on straight track is made up of two separate beams. If this were the case for the entire alignment, The Monorail Society definition for monorail would not apply. However, all curved track is enclosed, singular guideway. Rivers Monorail is indeed at least partially 'monorail.' Perhaps a more proper term should be mono-duorail. Before completion, a change in government has placed the completion of the monorail in jeopardy. As of Spring 2016 it was said the system was to be abandoned before opening.

See our Construction Gallery for photos.

A new real estate project in Calabar, is growing fast. Its name is Summit Hills and soon it will feature a short monorail. Summit Hills consists of a Convention Center, Hotel, Recreational Facilities, Golf Course, Clubhouse, Nature Reserve, Hospital and numerous residential units. Summit Hills will become connected to Tinapa Resort through a shuttle monorail line in 2016. The monorail using an Intamin P8 electric powered passenger shuttle train composed of ten passenger cars and two equipment cars (total of 12 cars per train) with seventy-eight total seats. The train will shuttle passengers between the CICC and the Tinapa complex while allowing access to Studio Tinapa, Tinapa Shopping Center, and the Tinapa waterpark and provides a quick alternative access connecting Tinapa to Summit Hills. Initially, one driver-operated train P8/78 with a maximum capacity of 78 seated passengers will serve altogether three stations. The system should more accurately be called a mono-duorail considering straight segments of track are actually made up of two large I-beams. An extension to Margaret Ekpo International Airport has been suggested by Cross River State Governor Ben Ayade. 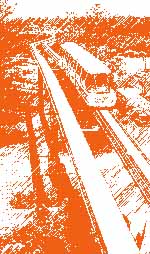 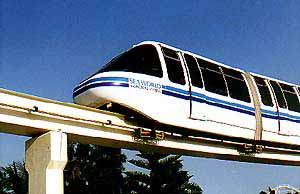 Australia's first monorail is a Von Roll Type II system that carries park visitors in a single track loop around the park. Stations are near the entrance of park, one is by a water slide park and another is at Nara Resort Hotel at the north end of the Sea World park. The minimum curve radius of this installation is 20 meters and the maximum gradient is 6 percent. There are nine cars per train. Total train capacity is 100 passengers and capacity is 1800 passengers per hour. Top speed of the system is 27 kph. Sea World attendance increased by a staggering 35% in the first four months of the monorail. 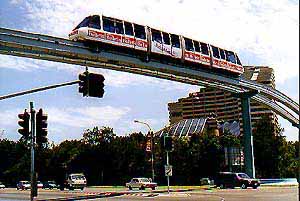 Four-car monorail trains run between the Grand Mercure Hotel, Oasis Shopping Centre and Jupiter Casino. The Von Roll Type III system is actually a bit of overkill for the needs of the three station system. At one point in the late 1980's it was planned to be part of a much larger 10 km system that was to run up and down the heavily travelled Gold Coast corridor. That was killed by funding problems and resident opposition. The Gold Coast today continues to suffer with the congestion created by well over 2 million visitors to the area each year. A unique aspect of this monorail is that the Oasis Mall it enters was designed with the system in mind. At one point the trains quietly cruise right through a large atrium of the mall. See Environment Friendly for more pictures. In 2001, the owners of the system acquired the trains and track of the short-lived Merry Hill Centre Monorail of Birmingham, England. The trains will be used to upgrade the system and there is a possibility for extending the monorail to a proposed convention center nearby. 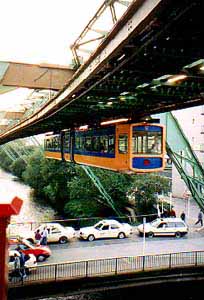 The world's oldest operating transportation monorail operates in the Ruhr district of Germany. A special preview run was held for the Kaiser on October 24, 1900. The "Schwebebahn" opened to the public on March 1st, 1901. During the 19th century, the towns of Barmen, Elberfeld and Vohwinkel were growing rapidly and some sort of transit system was needed. Since a good portion of the line would be above the Wupper River, conventional elevated rail was not the ideal choice. Eugen Langen, an engineer of nearby Cologne, had successfully tested a double-track monorail system. The leaders of the towns were impressed with the technology and selected it. Construction began in 1898, 100 years before our website debuted. The original monorail cars were revolutionary in rail design in that they were the first all-steel transit vehicles. The trains actually swing freely beneath the track. Still, the trains never bank more than a comfortable 15 degrees. The name "Schwebebahn" translates to Suspended Railway. Top speed for the vehicles is 56 kph. Cars operate at an approximate two and a half minute headway and have a carrying capacity of 3,500 passengers per hour. In April of 1999, a derailment of a morning commuter train caused four deaths, the only fatal mass transit monorail accident in the 20th century. 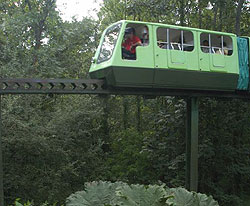 The Beaulieu Monorail is a combination excursion/transport monorail located at the Beaulieu Estate. The system guideway has a loop configuration and includes a South and North terminal. The monorail transports visitors from the National Motor Museum to Palace House. It also travels through the roof of the National Motor Museum, giving travellers a bird's eye view of the collection of over 250 vehicles, before continuing its journey outside. The system was obtained from one of the famous Butlin's Holiday Camps and moved to Beaulieu. The train design was modified from the Butlin's "bullet car" look into a boxier design that allows more space for passengers. 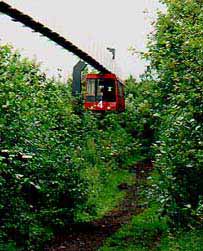 In 1973, the Siemens Research Center in Erlangen began tests of a 1.4-km test track of a suspended peoplemover-scale monorail. With wheels and running surfaces inside a steel beam, the German monorail is a close cousin to the Safege Monorail developed in France (see Monorails In History-Part II). With knowledge gained at the test track, the first revenue passenger service "H-Bahn" opened at Dortmund University in 1984. The initial line was only 1 km long but connected two segments of the Universtity separated by a valley and a major roadway. The system was so popular with students and faculty that more than five million passengers had been carried by 1991 (in complete safety). With this success came backing for extensions. Additional track was added at both the south and north end. A spur line and switch was added which allows passengers to transfer to an urban rail line directly below the DO-Universität station. A new 1.2 km line to a nearby science park opened in 2003. Top speed of the the vehicles is 65 kph. With a minimum frequency of 40 seconds there are 36 scheduled runs per hour. Further extensions are being planned. (See our Links Page to go direct to the Dortmund H-Bahn Site)

You can't pick up a subway system and move it across the planet. In that respect, light rail isn't very mobile either. But it's not a problem with monorail. The track is modular, easily transported and the pylons do not require a lot of ground work if moved. These Von Roll II trains now carry passengers from a remote parking lot to the entrance of this popular park in England, but they once carried thousands of passengers at Expo 86 in Vancouver, Canada. The seven trains carry up to 100 people each. System capacity is 4,800 passengers per hour. Top speed of this peoplemover class system is 27 kph. The monorail system was officially opened by William Shatner (Captain Kirk of Star Trek) on August 13, 1987.

Built by the British firm CPM for $4 million, the Chester Zoo monorail transports visitors between two stations within the park grounds in a loop confinguration. As with other zoo monorails, it affords passengers a good view without disturbing the animal habitats.

The E.P. Exress Monorail travels between a parking lot and the popular theme park near Rust, Germany. Manufacturer of the system was Von Roll. Following the lead of Alton Towers Theme Park in England, Europa Park owners purchased the system used. The Von Roll Type II system reportedly first operated at Expo 92 in Seville, Spain. Note the long distance between the narrow pylons, another example of monorail's small footprint on the environment. 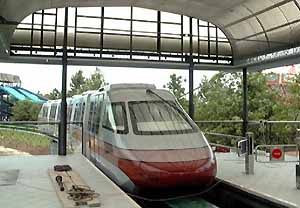 Severn-Lamb built this monorail system in Italy. It's located at Mirabilandia Ravenna Amusement Park in Savio. Two SL 6 monorail trains have been delivered and are in operation. The loop system is approximately 2 km long. There are two stations on opposite sides of the amusement center. There is also the possibility of the system being expanded in 2000 with additional trains and service to a new hotel. Thanks to Ken Jowaiszas, Director of Marketing Services for Severn-Lamb USA for the information and photograph. 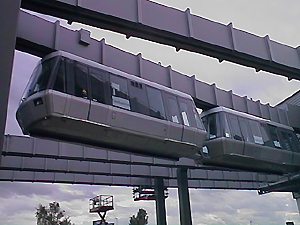 Siemens added another operational monorail to their resume when Düsseldorf Airport opened their Sky Train system in 2002. The monorail is based upon the same technology used at Dortmund University. Built to drastically reduce the amount of automobile traffic to the airport, the monorail line connects two airport terminal stations with a rail station on a heavily traveled Düsseldorf-Duisburg railway line. A parking lot also has a station along the route. Like Dortmund, the system is totally automated. Traveling a top speed of 50 kph, time from rail station to terminals is around 5 minutes.

The Moscow Monorail is based on Intamin technology, with many modifications designed in by the Moscow Institute of Thermal Technology. The 4.7-kilometer system started operating in January of 2005. Heating equipment has been installed in the guideway to deal with Russia's harsh winters. For more information and spectacular images, see the Moscow Monorail Photo Essay in our Special Features section.

A minirail shuttle operates between a Metro station and Atlantis City, a condominium/shopping center development in Western Ankara. The line operates primarily at ground level, except for a road crossing at the mid-point turn between the complex and Metro station. The track surface has a unique 'diamond plate' metal floor texture. The system was provided by Beijing Shibaolai Amusement Equipment Co. Ltd.

A group of companies under the name Morton is building the first section of a system very similar to the Siemens H-Bahn. The technology is referred to as 'Arrow.' The initial one-kilometer will be tested in the Krasnogorsk district of Moscow. After the system technology is proven successful, the system will be extended to 22 kilometers. Pylons and track are being installed for a Summer 2016 completion. The system will be part of a modern new neighborhood.

Lengthy negotiations had delayed Bolgona's Marconi Express monorail, but civil work is now under way. Intamin's contract for three P30/50 trains, part of the track and ride control was signed in January of 2016. Trains are scheduled to be on site for testing and commissioning in 2017, with a customer public opening planned for early 2019. The Marconi Express monorail will link Bologna Centrale main line rail station with Marconi Airport. P30s are capable of speeds up to 80 km/h. The 5-kilometer line will have one intermediate station at Lazzaretto. At times of increased ridership, two of the trains can be coupled and run as a pair. Unique to the Bologna system will be the application of solar power via panels installed alongside the guideway. The monorail track will be placed on top of a bridge-like superstructure, similar to Jacksonville's monorail. It is estimated that one million passengers would use Marconi Express in its first year of operation.