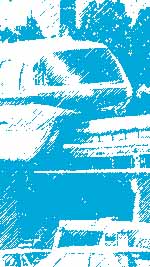 From early on in the planning of Disneyland, Walt Disney envisioned a monorail in Tomorrowland. Walt and Disney park designers were not impressed with several suspended systems they looked at. Legend has it that he and Mrs. Disney happened across the Alweg test facility in Germany by accident and monorail history was made. Disney designers modified the Alweg system and installed a smaller-scale Alweg monorail in 1959. At the time it was the park's most popular and talked about attraction. Millions of TV viewers saw the monorail on Walt's Sunday show and became convinced of its future in transit. In 1961 an extension was added to connect to the nearby Disneyland Hotel. While Disney installed the monorail to promote it as a train of the future, the effect it had was just the opposite. Monorails for many years would be type-cast as amusement park rides. Then there are the believers who remember Walt's early TV shows and still dream of beamways running down major transit corridors in the USA. Train designs have been designated Mark I, Mark II, Mark III, Mark V and Mark VII (Mark IVs and Mark VIs were for Walt Disney World in Florida).

When it opened in conjunction with Seattle's Century 21 World's Fair, the Seattle Alweg Monorail and the Space Needle were the icons of the exhibition. In fact, the monorail adorned two Life Magazine covers that year. For years, talk of extensions remained just that, but the legacy of the Seattle Monorail to this date is how the world took notice of the technology. If you want to see its influence on other monorails, look at the Monorails of Japan section to see how many monorails have been built using Alweg technology. The two four-car trains are the only remaining trains in the world that were built by the Alweg Company. Obviously, they were built to last. In November of 1997, 93,000 Seattle voters passed the Monorail Initiative to build citywide monorail system. On four separate ballots, voters supported the monorail. However, lack of City Hall support and a controversial debt financing plan resulted in the cancellation of the project in November of 2005. 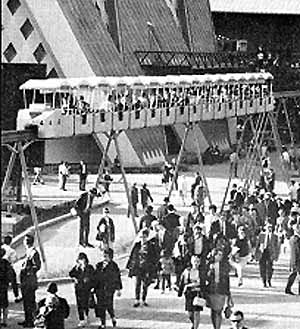 Expo 67 had an extensive minirail system. Three separate track loops covered almost all points of the fairgrounds. One loop remains today at the La Ronde amusement park, an outgrowth of a smaller entertainment center of Expo 67. The trains were originally assembled in Switzerland and first operated at the 1964 Swiss International Exhibition in Lauzanne. The picture here shows one of the trains as they appeared in 1967. 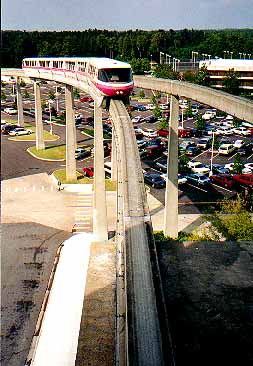 Using experience gained from three generations of monorail trains in Disneyland, Disney-designed Mark IV trains began transit service at the world's #1 tourist destination in 1971. When a second theme park was added to the resort in 1982, the Epcot loop was added with additional trains. By 1989, most of the Mark IV's had travelled around 67,500 miles each year. Having accomplished nearly ten million miles of travel with a reliability rate of 99.9% in eighteen-hour-a-day operations, it was time for a new set of trains. Bombardier, licensed by the Walt Disney Company to market their monorail design, improved the design and debuted 12 new MVI trains beginning in 1989. Built closer to transit standards, the MVI design has been seriously considered for several transit applications since. 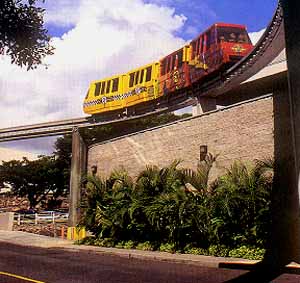 Developers grappled with what to do about the watercress farm field barrier between the two buildings of the Pearlridge Center Mall in Aiea, near Pearl Harbor. A short monorail shuttle by Rohr Industries was installed to carry visitors between the two facilities. 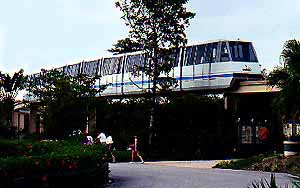 The Miami MetroZoo monorail crosses zoo walkways 30 times, a safety nightmare if surface rail had been chosen. But it wasn't, so zoo visitors in Miami are safe. The zoo wasn't so safe when Hurricane Andrew devastated the area in August of 1992. Just about everything at the park was shredded. However, most of the monorail guideway survived, as well as the trains. The monorail was giving tours of the devastation soon after and today the zoo is back in full swing. The monorail was built by Universal Mobility Inc. The rights to the technology have since been acquired by Bombardier. With modifications by Bombardier, new UM monorails have since opened at Tampa and Jacksonville (see below). Photograph by TMS Associate Editor Dale Samuelson. 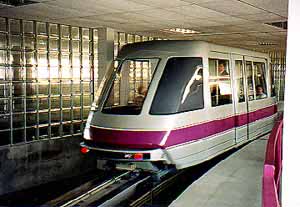 For less than $12 million, Tampa bought itself a first class peoplemover monorail. Tampa was Bombardier's first contract using UMIII technology. This was also their first totally automated monorail. Bombardier supplied six single-car vehicles, track and a five-year extended warranty. The pinched loop system consistently provides better than 99.5% reliability. Attractive glass tile stations are located at the terminal and in the parking lot. Easy to understand graphics and TV monitors help passengers find their way to destinations. Tampa has the distinction of having the first monorail in the USA to use active switches as part of the main line. The monorail also is different in that the entire guideway is built inside the parking lot and terminal structure. 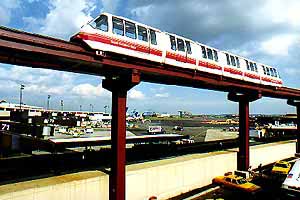 Newark's monorail started out as Von Roll's most extensive system to date. During construction, Von Roll sold its monorail technology to Adtranz. Adtranz added major modifications including the design of completely new switches. Within a few years, Adtranz built a 1.6 km extension of the airport monorail to a new Amtrak station on the heavily traveled Northeast Corridor. The monorail now carries passengers between parking lots, rental car facilities, three terminal stations and the rail station on the Northeast Corridor. Adtranz has since been acquired by Bombardier, and no Von Roll-based technology monorail has been built since, yet the Newark International Airport Monorail has become a hit for those wishing a rail connected flight to or from the area. An average 2 million paid passengers ride the system each year, in addition to the millions that ride for free within the airport grounds. 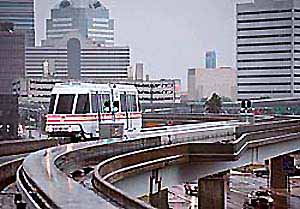 In 1994 Bombardier was selected by the Jacksonville Transportation Authority (JTA) to replace its existing Matra-built peoplemover with a totally automated monorail system. The first two-station segment of the "Skyway" monorail opened in 1997. The UMIII trains are similar to their predecessors in Tampa, but run on concrete beams instead of steel. The beam is placed on top of the massive Matra guideway, and unfortunately JTA has elected to continue using the obtrusive support structure for Skyway track extensions. A tragic fatal accident has already occurred to a worker on the structure next to the beam. If more extensions are built, hopefully only narrow monorail track and a centerline catwalk will be included, like at Newark International. Maximum speed of the two-car trains is 48 kph. The system layout consists of two pinched loops that merge at a level Y-junction. Additional vehicles can be added to trains as the system grows. 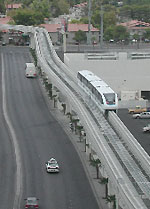 It was short and it only had two stations, yet when it opened in 1995, it carried more passengers than some light rail systems that are fifteen times longer with far more stations. This privately built and operated monorail has been lengthened along the famous Las Vegas Strip. The line runs from the Sahara Resort to the MGM Resort. Further extensions are under study. See our Special Feature segment on the Las Vegas Monorail for details and images. 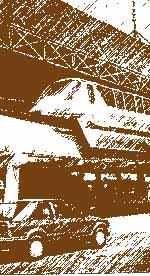 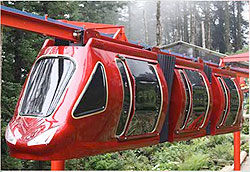 In late 2009, a small, suspended monorail was installed at Aldeia do Papai Noel, a Christmas-themed park in the hills of Gramado, Brazil. The I-beam monorail features standard industrial monorail parts. Eurethane wheels carry the train and passenger load. It is powered by chain-drive electric motors. 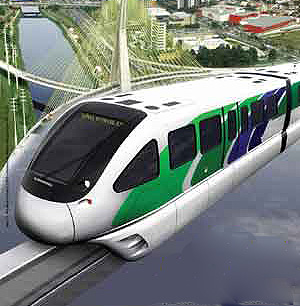 The City of Sao Paulo is currently working on implementing a major monorail network. Three lines are approved so far. Construction began the first line in 2010, before the system supplier had been selected. An astounding 100 kilometers of monorail alignment are proposed. In 2010, Bombardier won the contract for the first 26-kilometer line, Line 15 (formerly Line 2). In June of 2011, Scomi Engineering won the contract for the second monorail, Line 17. In 2014, Scomi also won the Line 18 contract. All of the monorail lines will be integrated with the city's extensive rail system. When completed, the first line will be the largest and highest capacity monorail system in the world, designed to transport 48,000 pphpd, after the predicted fleet expansion. It will reduce end-to-end travel time from current two hours to just 50 minutes with up to 500,000 riders daily. The second monorail, Line 17, is said to be capable of handling up to 252,000 passengers per day. 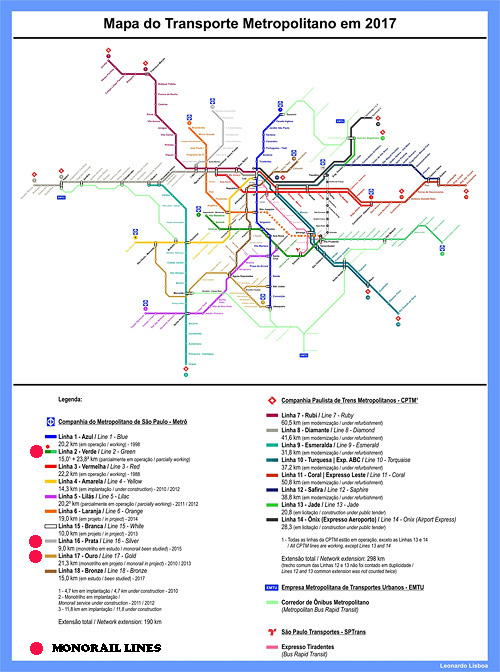 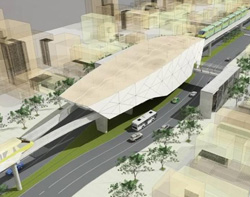 The City of Manaus initial monorail line will 20 kilometers long and have nine stations. Officials originally wanted the monorail to be operating in time for the World Cup of Soccer in 2014. In August of 2011 a contract was awarded to Scomi and its partners to build the system. The line will feature ten train sets, each with six cars. As of 2014, the project has been suspended until further notice.