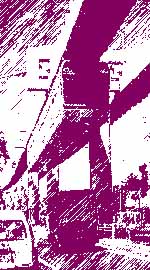 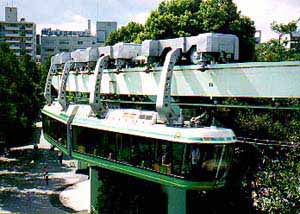 While this monorail only serves as a very short transport line within Tokyo's Ueno Zoo, it started out as a serious experiment. The Tokyo Metropolitan government authorized its construction while looking for new ways to ease suburban traffic congestion. The line is an updated version of the Wuppertal Schwebebahn of Germany (see Monorails of Europe). Instead of steel wheels however, the designers used rubber tires. To cut costs, off-the-shelf parts were used as much as possible. It became the first monorail in Japan but no other systems were built based on it. The Japanese would soon adopt foreign technology for their major monorails such as the Swedish/German Alweg system and the French Safege system. Still, with over a million passengers in its first year, the Ueno Monorail proved the popularity of monorail to Japan decision makers.

If you want the best proof of how monorail can work in transit applications, this is the one!

First Proof: Technology. The monorail has operated without flaw since 1964 when it opened in time for the Olympics of that year. It carries people from the Haneda airport to Hamamatsucho Station, which is located on Tokyo's main rail loop. It is a dual rail line in which trains reverse direction each end via switches. To this day many monorail opponents will tell you there are problems with monorail switches. If there were, the Tokyo-Haneda Monorail and many other major monorails could not operate.

Second proof; Cost Effectiveness. This monorail is owned and operated by JR. Each year it turns a handsome profit. How many subway or light rail systems turn a profit? Most depend on taxpayer money subsidies, as do roads and highways.

Third proof: Operational Experience. As of 2013, over ONE AND A HALF BILLION passengers had ridden the Tokyo-Haneda Monorail. Time and time again we hear it said that monorails aren't proven in transit applications...which is either an amazingly bold lie or a demonstrated ignorance over monorails.

Fourth proof: Adaptable to Surrounding Environment. The Tokyo-Haneda line proves that monorail can be built almost anywhere. The tracks begin by parallelling the Shinkansen and city main rail lines. They then cut through heavily developed business and residence areas. Much of the supports are in the canals between the many artificial islands of Tokyo Harbor. At one point, there is a subway segment that runs beneath one of the canals. Stations are built inside buildings, at ground level and in subways beneath Haneda Airport terminals.An extension opened in 2004, with the addition of Terminal Two Station at Haneda Airport. In 2010, a new station opened for Haneda's new International Terminal. Pictured are a Type 1000 train, which was introduced in 1990, and a Type 2000 train introduced in 1997 (photo by Hiroshi Naito). 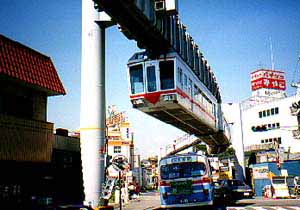 Here's a transit corridor where light rail would be almost impossible. Picture a two-lane road winding through residential and commercial areas. Grades of 10% are common and space for any "conventional" rail system doesn't exist. What we've described is the Shonan corridor, which runs from the Ofuna rail station to the coastal area of Enoshima (20 miles southwest of Tokyo). It is the first operational system in the world based on the French-developed Safege monorail. The original Safege test track is featured in the 1960's film "Fahrenheit 451." The rubber-tired bogies run inside the steel beamway. Switches are extremely important with the Shonan system, in that the trains run in both directions on the single beam at all times. Passing is accomplished at stations, where the beams split to both sides of the platform. Timing is extraordinary, and it has operated since 1970 flawlessly. From purely an enthusiast's point of view, this monorail is one of the most fun to ride anywhere. There is a sensation of a smooth flight through trees and above the traffic jams below. A couple of tunnels through hills add to the experience. A three-page photo essay of the Shonan Monorail is in Special Features.

This steel beam monorail runs from one end of Nagoya's popular Higashiyama Zoo and Botanical Gardens and back in a loop configuration. It serves as with a dual function of giving transportation from one end of the park grounds to the other, yet at the same time giving riders spectacular views of the popular destination . Before this steel straddle monorail was installed, Mitsubishi's prototype Safege monorail operated in the park from 1964 to 1974. It was the first revenue-producing Safege line in the world. The original Safege test track was in France. The Mitsubishi vehicle and a section of track have been preserved and are on display at Higashiyama. 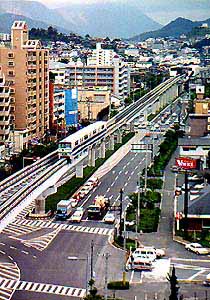 After the Tokyo-Haneda system opened in 1964, no new Alweg-type monorails were built in Japan until the Kitakyushu City Monorail opened in 1985. Hitachi has been busy since installing similar track all over Japan and elsewhere. After the Tokyo system was built, the Japanese Monorail Association was formed and it established standards for both straddle and suspended monorails in Japan. One of the new standards for straddle monorails was that passenger cabins must be entirely above the bogies, which allows a flat floor from the front of the train to the rear. Although the exterior width is close to earlier Alweg trains like Seattle and Tokyo, the interior is much more spacious with flat floors and sideway facing seats only along the train walls. The end result of the Japanese standards is a much taller train, and in this case a much boxier looking design. Trains for later systems have introduced a bit more streamlining. What sets this monorail apart from the earlier Japanese lines is the liberal dose of landscaping along the road medians below the guideway. In some areas the appearance of the guideway is that it is supported by the trees that have grown up beneath it. There are many areas where steel guideway is used for long spans. Both concrete and steel beams can be seen in this image taken by TMS President Kim Pedersen. A large station is visible in the distance. Visit our Special Features page for a seven-page photo essay on the Kitakyushu Monorail. 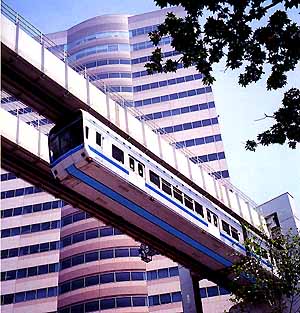 The Chiba City "Townliner" is currently the longest suspended monorail system in the world, and it is getting longer. Since it opened, the system has never stopped getting bigger. Long term plans are for the monorail to be over 40 km in length, and this will most likely be surpassed. Building upon the knowledge and experience of the Shonan Monorail, the Mitsubishi Company built this dual-tracked system to connect suburbs in the Chiba Prefecture with Chiba's main rail station downtown. It is currently the world's only dual-beamed Safege-type system. It also has a spur line off the main line, another example that monorail switches work fine. One of the reasons Chiba officials selected Safege was because of the occasional inclement weather of the area. With Safege, the running surfaces and train bogies are protected from the elements inside the beams. Alweg-type monorails need either heaters in the beam or shovels on the fronts of beam during heavy snow or ice conditions. The downside of the Safege system is the larger size of the beams. A Texas-based company named Aerorail is proposing a smaller-beamed, higher speed version of Safege using steel rails (see Links page). 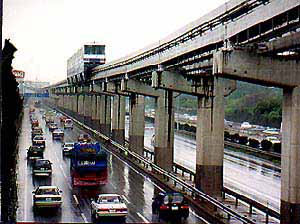 Metropolitan Osaka is the second largest city in Japan and is considered the center of economy and culture. Rail lines eminate from the center of the city to surrounding areas. The Osaka monorail is being built to connect these outer communities with a half circle system which will eventually surround the city with over 50 km of track. The first 6.6 km segment opened in 1990 north of Osaka. The system now begins at the Osaka domestic airport, heads east along a freeway, then turns south with the freeway and crosses a dramatic arched bridge built exclusively for the monorail. A spur line has been added which connects the system to a university and a new community being built from scratch with the monorail corridor in mind. The Hitachi four-car trains draw 1500 volts direct current from the bus bars that run along the side of the guideways. In 1995, the disastrous earthquake of nearby Kobe proved to be a test for the Osaka Monorail. It withstood the violent quake and proved to be a vital transit link in the area as traffic on the parallel freeway became completely jammed with evacuees. 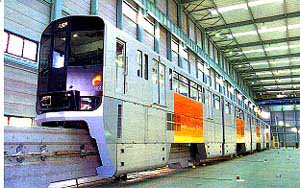 Yet another giant Alweg-type system has been built by Hitachi. This one is west of Tokyo. Pictured here is one of the four-car trains that run on the first segment. The Tama Monorail will one day include an amazing 93 km of dual-beamed guideway. Unlike monorail "plans" seen in other parts of the world, the Japanese usually follow through and build them. As with most monorails in Japan, an integral part of the system will be many intermodal connections with different rail lines. The corridor is an interesting one, with rivers to cross, major roads to follow, grades to climb and descend, as well as one segment where the guideway dips below grade. Additional pictures and maps are now available in the Special Tama Page.

With the great success of Tokyo Disneyland, the park owners at Oriental Land Company expanded the resort area with an additional theme park, Disney Seas. The design of the trains are an interesting departure from previous Disney monorails, in that they are built to Japanese standards. That means they are much bigger than any previous Disney Monorail. Since they are part of the Disney resort on Tokyo Bay, they are of a considerably sleeker design than most other large-scale Japanese monorails. The system configuration is a single-tracked loop. Shown here is a map of the system. Going clockwise from the top, the stations are for Maihamu Station, Disney Seas Theme Park, resort hotels and Tokyo Disneyland. Picture is courtesy of Japan's Disney Fan Magazine. 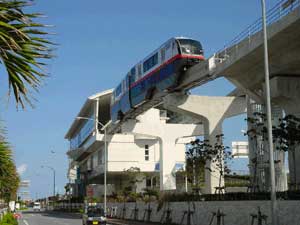 The Okinawa Urban Monorail is the first rail system on the island of Okinawa since World War II. Following the precedents set by earlier monorails in Japan, the Naha dual-beamed line connects city points with the airport. Starting at the airport, the line runs northeast through the city center. The guideway terminates at Tera. Including the thirteen stops along the route, end to end journey time is around 30 minutes. Trains run every six minutes during peak periods. Following a precedent set almost a century earlier in Wuppertal, part of the line follows along a river channel. Good ideas bear repeating. In 2012, a 4.1 kilometer extension was approved. The line will be an extension from the Shuri Station at the northeastern end of the line. Completion is expected by 2019.